Today, I needed to move my mods.

I saved enough crystals to get Enfys Nest up to 7 stars using shipments. Now to include her into my arena team, I need to make her shine. She has to be fast... and I'll probably need to strip other characters.

I'm using the Mods Manager to identify my best mods and plan the changes.

First things first : be sure to have your best mods equiped on characters ! The application can't discover unassigned mods !

...And use your ally code to enable the software to load your Mods Collection

That's something you need to do : plan your opening sequence. In my case, having the Sith Triumvirate and Nest in good shape, here's my play order (nothing fancy here) :

1- Enfys Nest, because she's fast, and can crush the opponent straight away by dazing and removing Turn Meter
2- Darth Sion, dispel any remaining foresight/tenacity up
3- Darth Nihilus, enemies are now open to be drained
4- Traya, let's isolate !
5- Emperor Palpatine, because he's the leader... I need him decently equipped

Next step, Modding Enfys Nest. It's not just picking the biggest +speed values.

I start filtering the mods, no surprise : I sort by speed secondaries.
Usually, I keep only 4 or 5 pips mods. I've got some decent speed secondaries on a few 4 pips mods.
Be careful though, you might want to pick only 5 pips for ship crew members ! 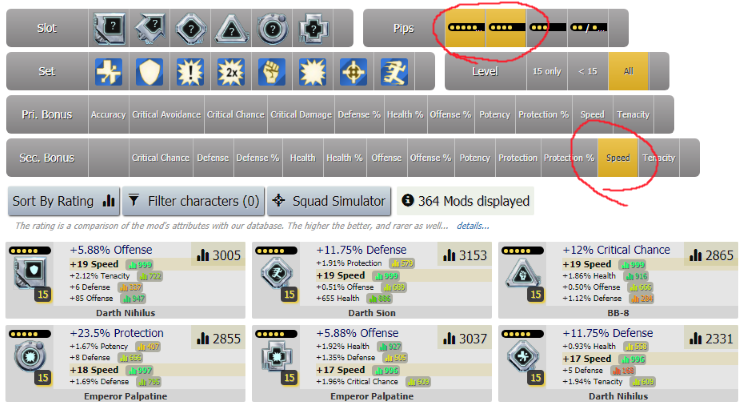 I can then identify how to build my fastest Enfys Nest possible.

This recap is not provided by the app. Don't you think I should add it ?

If I pick my 3 fastest mods (the 4th will can be an arrow, +30 speed guaranteed), a mismatched set in my case will be slower than my speed set. That may not be the case for you.
The speed set bonus provides +10% speed calculated on the base speed : the speed from a character without any mods.

Let's get into more details :

That'll make a small speed difference (-8 in the end), negated by a +15 speed set bonus (Enfys Nest is a naturally fast character).

I'm going for the arrow and 3 mods to enable the speed bonus from the set.

As per the mods recommandations (see the Mods Advisor), I wish to get an offense cross on Nest.
My speed cross (+15) arrow is unfortunately a potency one. But I've got a +17 on a non-speed one.
I'm Lucky.

I've bot a +19 crit chance mod (non-speed set) or 2 decent ones in the speed set : a +15 offense one or a +14 critical damage.
Critical Damage is the recommandation, Offense is not bad in replacement.

Ineed to compare other secondaries to balance my decision

Based on the other secondary stats on the triangles, I'll use the crit.damage triangle in the speed set.

For the arrow, I'll look for a mods with good critical chance secondary (+5.33%)

Finally the square one, because there's only one primary bonus, and the speed secondary difference is very small (-3)

Per primary bonus, I'll take a cross with offense. (having 2 mods with +17 speed and offense, I'll pick the best +critical chance secondary)

I'll just pick my best +speed circle. She has to be the fastest.

I've got my secondary preview. 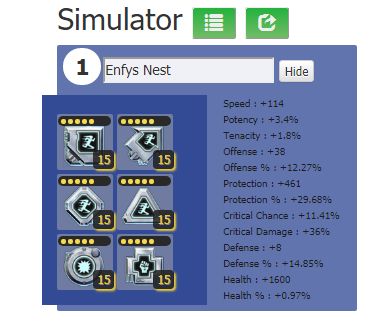 Primary Bonuses will change, some secondaries as well.
The most important though, is that I don't want to pick Enfys Nest mods by error.

I'll check "Hide" on Nest's frame, this will filter her 6 mods out.

Now the Mods list is only showing available mods.

For the fastest character, I went for the premium treatment.

When modding the other members, you can follow the same pattern : one character at a time.
But you can consider some trades to move primary bonuses where they fit, or to finish some Mod Sets.

The hardest part of modding

Randomness prevails when farming +speed mods. Your best speed bonuses are spread between various sets, or behind a useless primary.

On the other hand, on some characters you are advised to have a strong "critical damage / critical chance" set, with crit.damage triangle and offense cross for your damage dealers.

And your fastest mods are likely not aligned with your needs...

When modding, the balance between more speed or more damage can't follow any standard rules. Losing 20 speed between 2 modding option, in favor of a "perfect" mods layout is perfectly reasonnable.

Take into account the synergies in your squad, the effects of the leader. When there's turn meter manipulation, a slower character can keep up this way. For a strong tank, such as General Kenobi, losing speed in favor of protection primary bonuses is absolutely normal.

What if I remod a raid squad, but don't want to move mods from my arena squad ?

There's the "Filter characters" feature. Simply find and click on your arena characters to hide the mods from your arena squad.

You can keep on working on your raid squad, without the risk to pick an arena mod. 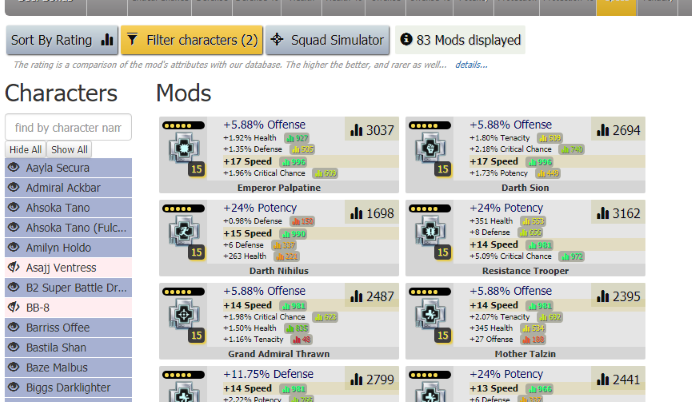 So, you've got live data mods, can we push the modifications back ?

I wish we could.

My solution is to use the Mods Moving Helper.
It's the 1st green button on top of the Simulator.

It opens in a new frame the list of your mods, where the mods stands, and where you should move it. To follow your progress, you've got checkboxes. 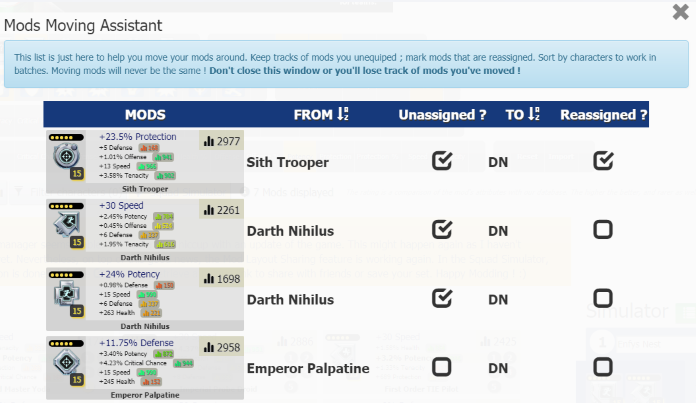 I found the fastest way is to :

Using this method, a complete, thorough remodding takes me about an hour.
I'm pretty picky, hence slow when choosing the mods. Inevitably, once finished choosing the mods, we need time to move them to their final destination.

With the recent announcement, I'm excited by the upcoming release of the "mods sets" feature. Moving mods will be faster (as long as sets remain untouched).

I'm less inspired by the auto-suggest featured.
I don't think this feature will ever replace your knowledge of your squad and its synergies.

Take Boba Fett for example. You can mod him differently if he's leader in a bounty hunter team, or as a damage dealer character.
Balancing set bonuses or going straight for best speed secondaries is something you will still have to decide if you want the best results.
Sometimes 1 more speed is enough in arena to have the best start. The game won't take that into account.

But it will definitely help beginners, or more experienced players needing a quick modding for PvE characters...

The fleet arena provides one of the rarest ressource : zeta materials. Fleet arena rewards are scaled strongly in favor of the first places. Discover the differences, and why you should step up in fleet battles !